Our Bright Future Begins With a Bite (of Plant-Based Food)

A world that’s healthy, biodiverse, and beautiful, with plenty of wild spaces. A world where the air and water are clean and the soil is rich with nutrients. A world in which there are fewer global pandemics and climate disasters, in which human health has improved, and in which we experience widespread food security.

Now imagine that all we have to do to turn that vision into our reality is get the next 100 years right.

For my children and their children to live in a world like that, I’d at least be willing to try.

My only question is: How will I know what’s “right?”

In early 2021, the UN gave us at least one very clear answer:

In order for our species to survive, let alone thrive in the ways we’ve described, we must go plant-based.

The UN concluded that agricultural production around the world has become so carbon-intensive that emissions from the global food system alone would be enough to put the Paris climate goals out of reach, even if all other major sources of emissions were eliminated1.

In the words of the Chatham House, a UN-backed think tank, “Our ability to sustain human populations” will “rely on” the adoption of a plant-based lifestyle2. 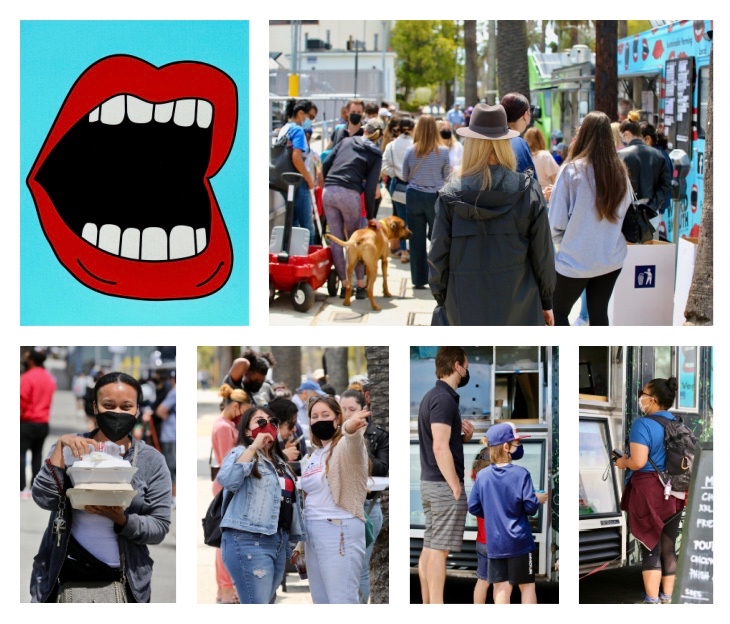 On Sunday, April 25th, in honor of Earth Day, the Palisades took a small step toward “getting it right” when three plant-based food trucks rolled onto Swarthmore Avenue as part of the Palisades’ first-ever mini vegan food-fest.

As the trucks – Word of Mouth, Original Herbivore, and Compton Vegan – opened their awnings, the Resilient Palisades Plant-Based Solutions Team that organized the event hoped that there would be a large enough turnout to make the event worthwhile for the vendors and the community.

What none of us could ever have anticipated was that over 300 people would joyfully line-up along the Swarthmore Avenue sidewalk in order to purchase a plant-based lunch that day.

The next four hours overflowed with enthusiastic appreciation and a heartfelt desire for the trucks to return to the Palisades – and soon!

“We will literally make this our Sunday tradition!” said one local mother. “We’ve been trying to eat plant-based at home; this is exactly what we need in the Palisades!”

Business at the trucks was so robust that by midday, all three trucks were running out of food as diners enjoyed delectable jackfruit ribs from Compton Vegan, famed fried chick’n sandwiches from Original Herbivore, and mac ‘n’ cheese bites from Word of Mouth – which were “literally the best thing my daughter and I have ever eaten!” (as one diner texted this author after the event).

Our town’s first vegan food-fest may have only taken up a small stretch of sidewalk on Swarthmore, but on that afternoon, we became part of a much bigger story that’s unfolding all across the nation.

Two days after our mini vegan food-fest, the New York Times posed the following question to their readership:

“Could an empire of the kitchen

and leave no one the wiser?”

Stop cooking with beef, a staple – perhaps the staple – of American cuisine, without anyone noticing?

It’s hard to believe, but “that appears to be the feat accomplished by Epicurious, the popular online recipe bank where home cooks have gone to hone their skills for a quarter of a century. The editors there revealed to readers this week that not only were they done with new recipes containing beef, but they had been phasing [beef-containing recipes] out for over a year3.”

“We think of this decision as not anti-beef,” wrote Maggie Hoffman, a senior editor at Epicurious, and David Tamarkin, a former digital director, “but rather pro-planet3.”

Only a few days after that, The New York Times and The Washington Post reported that the formerly-heavily-meat-based three-Michelin-star restaurant Eleven Madison Park in Manhattan would reopen after the pandemic offering a nearly entirely-vegan menu, thereby becoming, as the New York Times wrote, “one of the most high-profile restaurants to switch to a plant-based menu because of environmental concerns4.”

“It was clear that after everything we all experienced this past year, we couldn’t open the same restaurant,” wrote Daniel Humm, the chef and an owner of Eleven Madison Park. “We have always operated with sensitivity to the impact we have on our surroundings, but it was becoming ever clearer that the current food system is simply not sustainable, in so many ways5.”

Ms. Hoffman, Mr. Tamarkin, and Chef Humm are right: The way we’re doing things now is not sustainable and the time has come for change.

In A Life On Our Planet, a new documentary on Netflix featuring famed naturalist David Attenborough, Attenborough says, “We must change our diet. The planet can’t support billions of meat-eaters6.”

And no wonder when the average meat-eating American will eat 21,000 entire animals in their lifetime7.

Twenty-one-thousand animals to feed a single human being.

The animal agriculture industry is now, by some estimations, responsible for nearly 51% of global greenhouse emissions10, 11, 12.

And that’s not even to mention the damage that is being done to our seas9.

Thank goodness we have another option.

The millions of humans who have decided to eat a plant-based diet have already proven we can survive – and thrive – on plants!

When we personally make the transition to a plant-based way of eating and living, we allow ourselves, our children, and future generations the possibility of that beautiful future we envisioned.

But if we do not manage to shift to a plant-based way of eating and living, our planet will soon no longer be able to support life as we know it13,14, no matter what else we manage to get “right”1.

We on the Plant-Based Solutions Team feel so thankful to live in this especially-beautiful coastal community alongside all of you.

We respect where each person presently is on their personal food journey, so we will continue to approach this community with respect and deference as we empower each of you to become effective climate activists with every bite you take and every purchase you make.

As you decide for yourself and your family when the time is right to explore living a plant-based life, we’ll continue bringing opportunities to our community to experience just how delicious, healthful, inspiring, and accessible plant-based living can be.

Our next food truck even is planned for June, so stay tuned! And then, in the fall, we’re excited to bring you a full-fledged vegan festival, complete with delicious plant-based foods and goods as well as other offerings in synergy with our fellow Resilient Palisades environmental activism teams.

As David Attenborough says, “If we act now, we can put it right.” 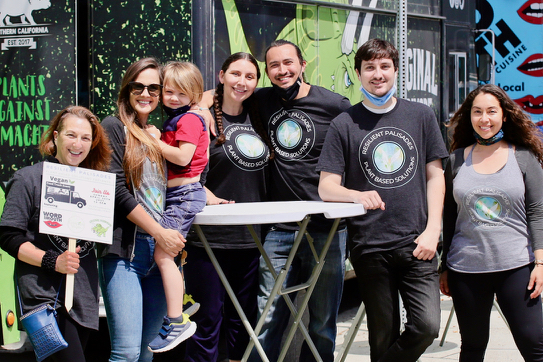 11 R. Goodland, J. Anhang | Livestock and Climate Change: What If the Key Actors in Climate Change Are… Cows, Pigs, and Chickens? | World Watch | 2009