Water is life. And just as any life, water is precious and sacred. Or at least, it should be considered sacred.

The next time you’re walking in your neighborhood, count the number of emerald-green lawns you see. Of those, how many are on the parkway or in an area that’s not being used by anyone – except maybe dogs – and is predominantly for aesthetics?

Considering that a 100’ x 100’ lawn uses an estimated 6,230 gallons of water every time you turn on the sprinklers, doesn’t it seem worthwhile to examine our water consumption at a time when LADWP water and energy prices have steadily increased by 3% and 1.5% annually over the past 5 years, and at a crucial time in our region’s water history when 41 out of our state’s 58 counties are in another declared drought emergency?

Droughts are part of California’s natural cycles. However, the important distinction is that climate change is increasing the frequency and intensity of droughts. And higher temperatures mean less fresh water. 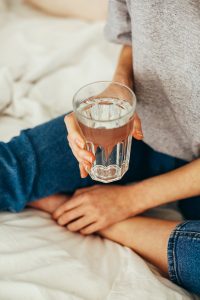 At the time I’m writing this, Los Angeles County has not been included in the emergency drought declaration. This is due to a combination of “a galaxy of new laws, low-water landscaping strategies, storage projects, conservation efforts, wastewater recycling and desalination plants”, including backroom deals by the Metropolitan Water District of Southern California (MWDSC – the statewide cooperative managing water to 26 cities and our country’s largest water district) to secure more water for Southern California than less-privileged communities (although they tell a different story). This is not the first time, nor will not be the last time, the MWDSC has controversially “secured” more water rights.

The important takeaway from our region’s so-far-security for fresh water this year is that the MWDSC has finally recognized that water conservation and recycling projects are key players in securing life in Southern California. In addition, with a newly hired general manager replacing the former manager who was not science-based and was simply kicking the can down the road, there may be some hope that the water district reshapes itself as proactive by creating better and sustainable opportunities for conservation and recycling.

In the meantime, as citizens of the American southwest, it’s our responsibility and a benefit to our resilience to understand issues surrounding this natural resource and then, to take action.

Water in the west is not a doom and gloom story. It’s geography. It’s politics. It’s economy. It’s ecology, and it is math – math that we cannot simply choose to ignore. How we use water in our home and garden, what we eat, where we shop, and who we vote for at the local and statewide levels are just a few actions that will collectively determine our personal and regional water security in the very near future.

WHERE DOES OUR WATER COME FROM?

This year, our country’s largest reservoir and one of the main water sources for Los Angeles – Lake Mead – dropped to its lowest level ever. (And given that Lake Mead also supplies the Hoover Dam, every foot of lake lost is approximately six megawatts loss of energy. Last week, the Hoover Dam – with nearly half of its produced energy coming to Los Angeles – had already lost 25% of its capacity.)

Within the next year, the American west is projected to experience the largest water (and energy) shortages since we began keeping records in 1896.

And the Sierra Nevada snowpack, supplying approximately 30% of our state’s fresh water, measured at a historically low 5% last month.

Some are touting the desalinization of the Pacific Ocean as the answer to our water problems. For a variety of reasons – both environmental and economic – desalination is not the answer. Here’s an article from pro-business Forbes magazine explaining why.

WHERE DOES OUR WATER GO?

Statewide, our water use is roughly 50% environmental, 40% agricultural, and 10% urban.

However, these numbers vary as water supplies change. For example, decades of unregulated agricultural use in the Central Valley has left groundwater basins so low that water from local rivers and streams has been drawn in, killing or destroying natural habitats and ecosystems.

People sometimes argue that most of our water problems are tied to agricultural use in the Central Valley and our conservation actions at home are meaningless. Urban use does only account for 10% of our water supply, after all. It’s true that decades without groundwater pumping regulations have depleted or poisoned groundwater basins (and in effect, stolen and poisoned groundwater that 1.5 million residents in surrounding rural communities, including farmworkers who grow the food, solely rely on.). And we’re not talking Mom n’ Pop operations, but large corporations, including a Los Angeles-based family who most of us may not know by name, but whose almonds, pistachios, and pomegranates we’ve all probably enjoyed at least once.

Whether or not new state and federal policies can save the Central Valleys’ groundwater supplies remains to be seen. However, some eighty-five percent of Californians depend on groundwater for some aspect of their daily life.

Unless you want market forces, aka the richest bidder, to determine the fate of our freshwater, our best bet is to conserve, replenish, and better store our groundwater supplies – in part by each resident west of the Rockies understanding water issues and adopting new everyday habits that reduce their water footprint:

THE MORE YOU KNOW

Just as knowing our family’s history or U.S. and world history allows us to learn and make better decisions, knowing our environmental history can also foster prudent decision-making in everyday actions and as we plan for a more resilient future. Starting with the American West in the late 1800s and early 1900s, where water rights and Bureau of Reclamation projects were strung together with backroom deals to create infrastructures and policies that remain in place today – both of which continue to negatively impact people and environments far and wide, from local communities, our environment, and tourism industry, and even south of our border in Mexico’s now-expired northern farming communities and the country’s main agricultural supply. To borrow from earlier: Learn about the history of water in the American west, I recommend you read, listen to, or watch “Cadillac Desert”, by Mark Reisner or read Dan Walters’ Key Conflicts Roil California’s Ever-Evolving Waterscape.